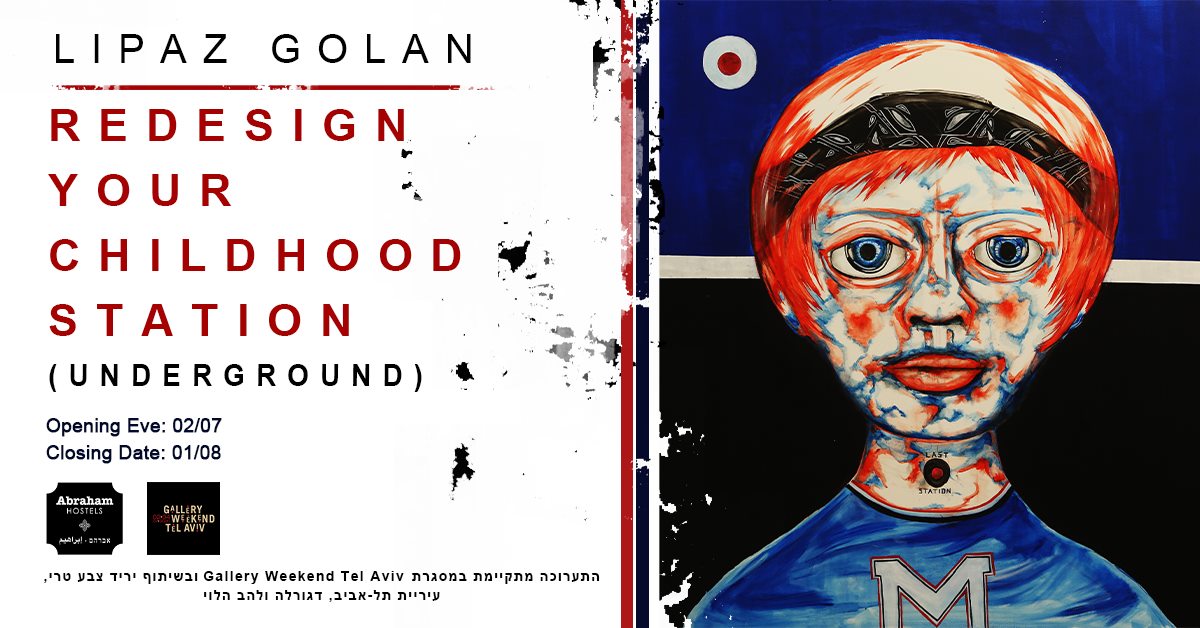 Abraham Hostel is getting ready to open our gallery with a re-launch of Redesign Your Childhood Station, a solo exhibition by the multidisciplinary artist Lípez Golan.

We had to close the gallery just days after the original opening night of the exhibition, and we are excited to be able to exhibit it again!

About the artist:
Lipaz Golan grew up during the 80’s and 90’s in Israel, in a violent neighborhood in Giv’at Shmuel against the backdrop of the Gulf War.
Lipaz recalls the major effect of American pop-culture on his surroundings, gazing eagerly at the characters portrayed in college films and television series. These characters were a model of admiration, imitation, and made him (and all of us) want to be like them, the class-king or the popular cheerleader. The gap between the shiny world on the screen and between the bleak reality around him, created within Liapz an inner dissonance that led him to wonder about the “ideal childhood,” and where his own childhood meets this definition.
After a long visit to the United States, which became a kind of coming of age journey, Lipaz returned with different insights than the ones who characterized his adolescence years. Memories of his difficult childhood in Israel became nostalgic, along with a re-appreciation of his own personal and specific experience. On the contrary, the appealing American culture has become a contemplation of a spark-less reality, a false nostalgia of opposites that encourage materialism, consumption, alienation, loneliness and non-acceptance.
The huge paintings presented in the exhibition portray the influence of these two edges, Israel and America, on Lipaz’s changing consciousness. On the one hand, images and metaphors from his childhood world, some of which are imaginary, use of children’s paintings and toys; On the other, using the fiery colors of the United States flag, to create an apocalyptic sense of destruction. In his works, Lipaz incorporates working techniques combining acrylic paint, markers and pencils on canvas. His style is affected by the world of graffiti and street-art language, graphic design, different drawing techniques and the world of technology and mechanics.

We're not around right now. But you can send us an email and we'll get back to you, asap.

Sign up to our newsletter & get the latest updates on events and pre-sales.

Sign up to our newsletter & get the latest updates on events and pre-sales.